slow and steady wins the race 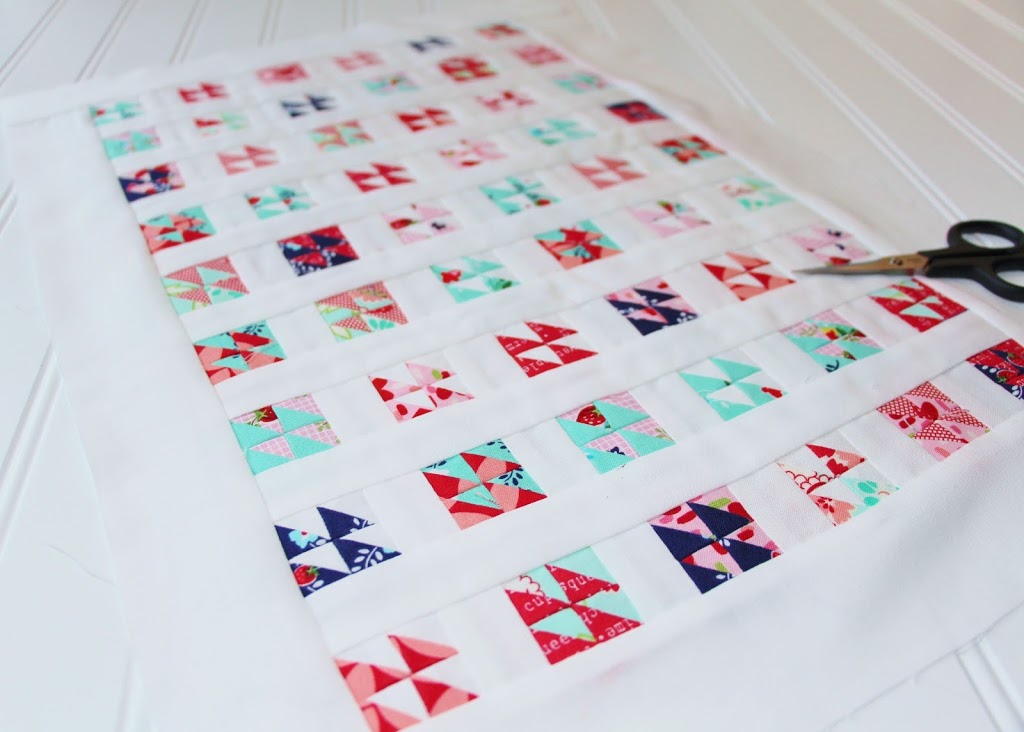 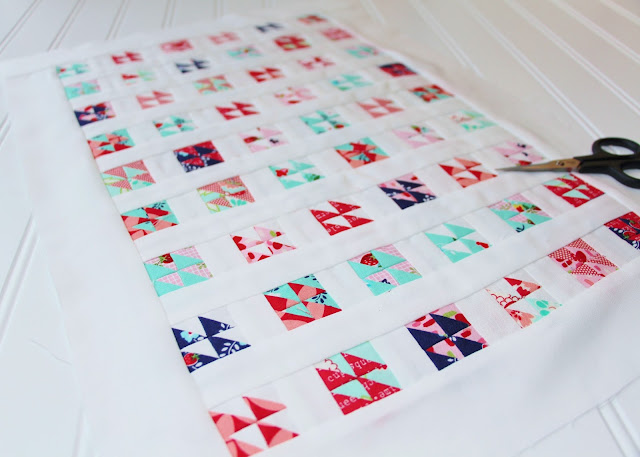 I’ve come to the conclusion that there is a fine line between scrap usage and insanity. This is a line I am willing to test, repeatedly.

In my last post, I shared a quilt I made for my baby niece. When I began making the blocks, I noticed that there are a lot of triangles that are cut off as waste. And being a scrappy quilter by nature, I just couldn’t relegate them to my scrap bin, to never be found again, to become distorted or to be lost. 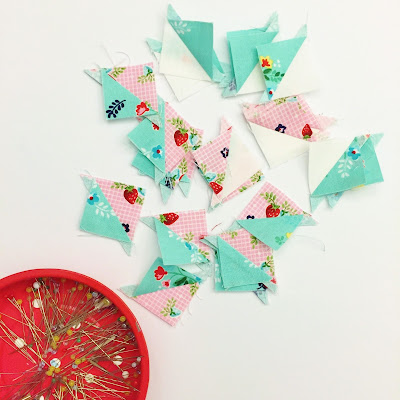 From the get go, I decided to stitch a second seam 1/2″ away from the the first seam on the edge that was to be cut away. That way, when I cut off the parts that the block no longer needed, I would already have a tiny little half square triangle block, ready to be pressed, ironed and trimmed.

I found that while some blocks could handle being trimmed to 1 1/4″, it was safer to trim them all to 1″. Each Shimmer block generated 24 half square triangles. And there were nine blocks total in the quilt I made, so if I just kept it up and didn’t flake on this, by the end I would have as many as 216 HSTs. The thought was really exciting.

(Mini anything has always appealed and I have been itching to make a mini for my wall.)

While I stitched through my niece’s quilt, I kept pondering the layout. To sash or not to sash? Single HSTs or grouped HSTs? If grouped, how big a group? If sashed, how big? Round and round I went.

I trimmed all my HSTs using my Bloc Loc ruler and about half way through, realized I could do multiple (as many as 5), at a time in one layout. (See my instagram account if interested in a video of this.) This definitely saved time and I’ll be using this procedure again for sure. 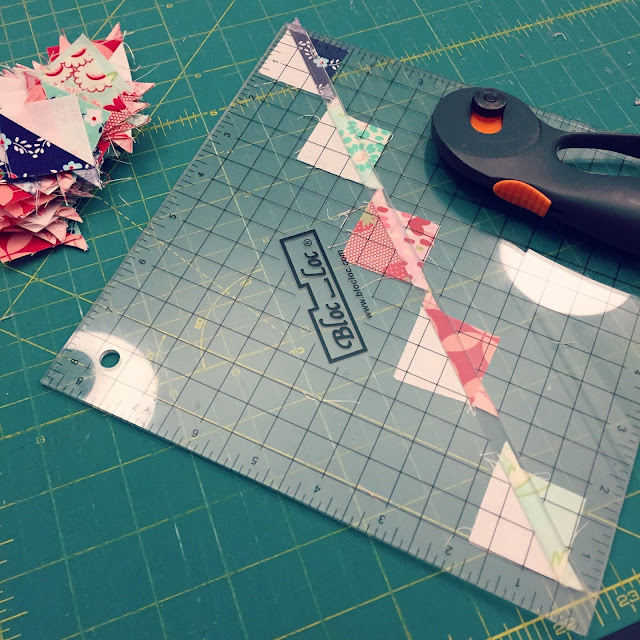 Eventually, I decided on groupings of four HSTs of the same type. After sorting all my HSTs, I realized that regardless of the color of the HST, each sorted group had an amount based on a multiple of 4. And I wanted to use up all my little hard earned blocks, so groups of 4 was the way to go. 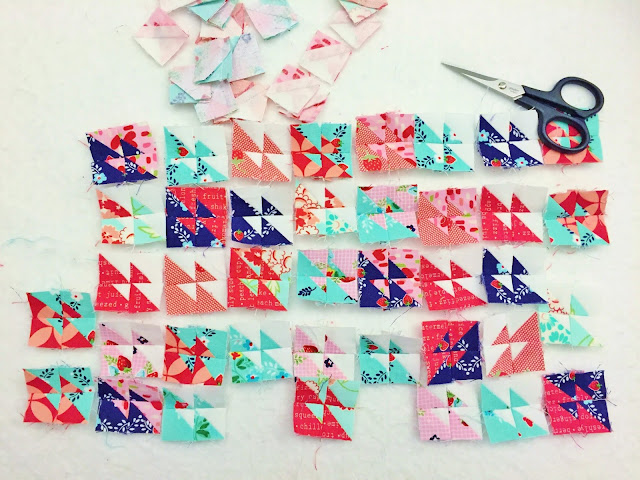 Once I decided that, I made a quick plan of doing 54 groups of 4 blocks (216 total), which would work out to a nice layout of 6 blocks by 9 blocks. 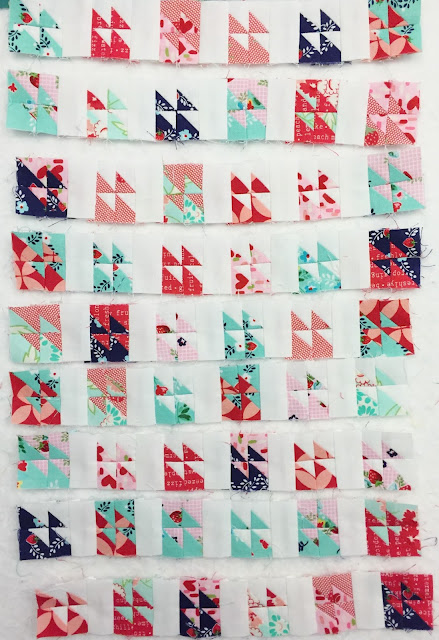 I decided on using a sashing of 1 1/4″ width for in between the blocks. Each HST finished at 1/2″ square, making the 4 patch block 1″ square finished. The sashing between would finish at 3/4″. I did an outer sashing of 2″ unfinished.

I am beyond thrilled that this turned out EXACTLY as I hoped.

Now to decide on quilting…

Linking up with Crazy Mom Quilts for it finish it up Friday. 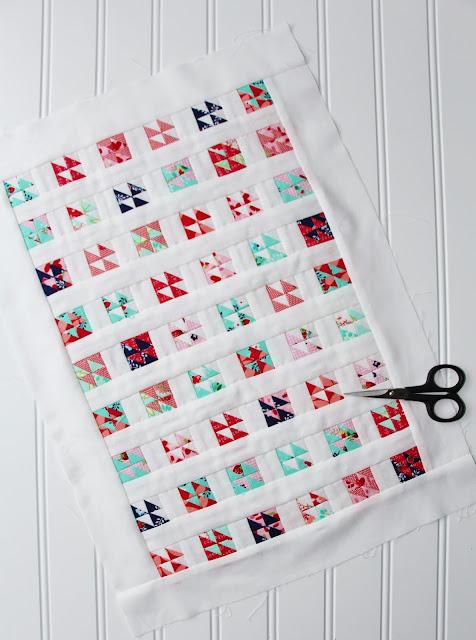 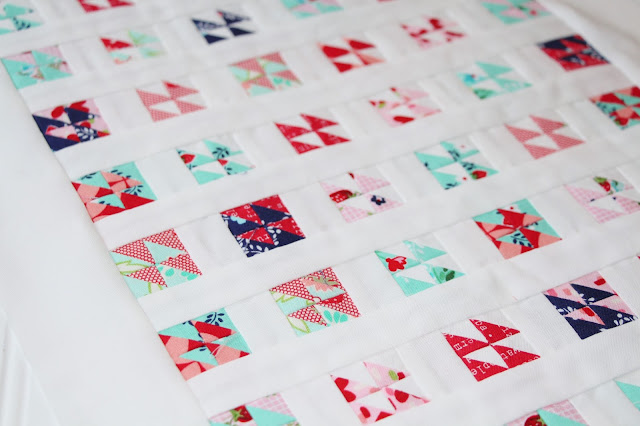 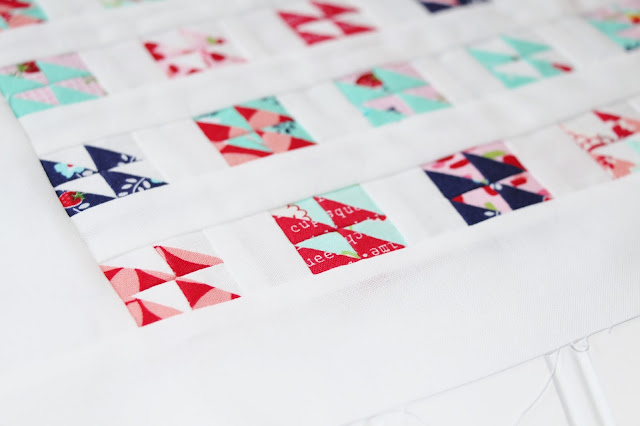 13 thoughts on “slow and steady wins the race”

Leave a Reply to the momma Cancel reply