I finally managed to find a moment to blog about a recent finish. In between all the Sewvivor excitement, I have less than a week till I return to work, till school starts, and we are smack in the middle of house hunting. It’s been a little wild and crazy over here. But, I digress.

A little while ago, our local VMGQ (Vancouver Modern Quilt Guild) decided to set up a mini quilt swap within our guild. Of course, I was all for it.

I was chosen to make a quilt for Amy Dame, a fabulously creative and incredibly talented person. I was a little bit (A LOT) nervous about what I would do. But in reading her questionnaire (you fill one out when you participate in a secret swap), I learned that she was obsessed with the churn dash block. Now, for no particular reason, I don’t really like the churn dash. I find it a bit choppy or disjointed somehow. This year, there is a definite trend favoring “nested churn dash” blocks, where you have one block inside the next, inside the next and so on.

Always a sucker for a challenge, I figure what better way to challenge myself than taking an extremely traditional block that I don’t like and change it to be something I would like, and modernize it.

So I made my own modern version of a nested churn dash, starting with a tiny little block, and setting it on point, like an economy block. Then I made a second churn dash around the edges, and set the whole thing on point again. 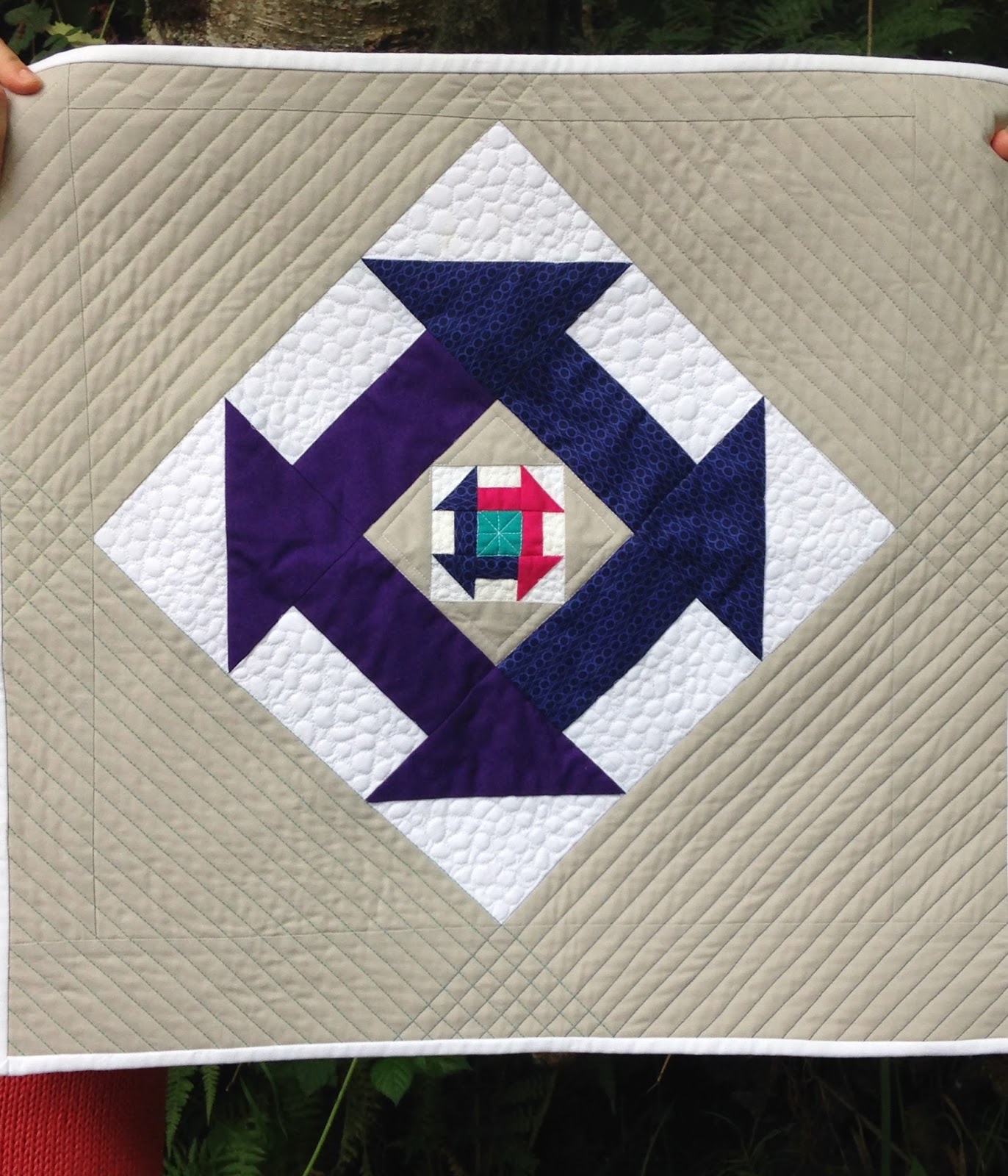 I chose to use colors Amy likes, jewel tones, etc. and tone on tone fabrics. But to make it even more modern, I off-set the colors so each churn had two colors. Set the whole thing on Moda Bella grey, add a couple borders to off set it even more, and you have a mini.
I did this within a DAY of receiving my recipients information. (And of course, feeling cocky, was sure that THIS would be the (one) thing that was finished in a timely manner.) 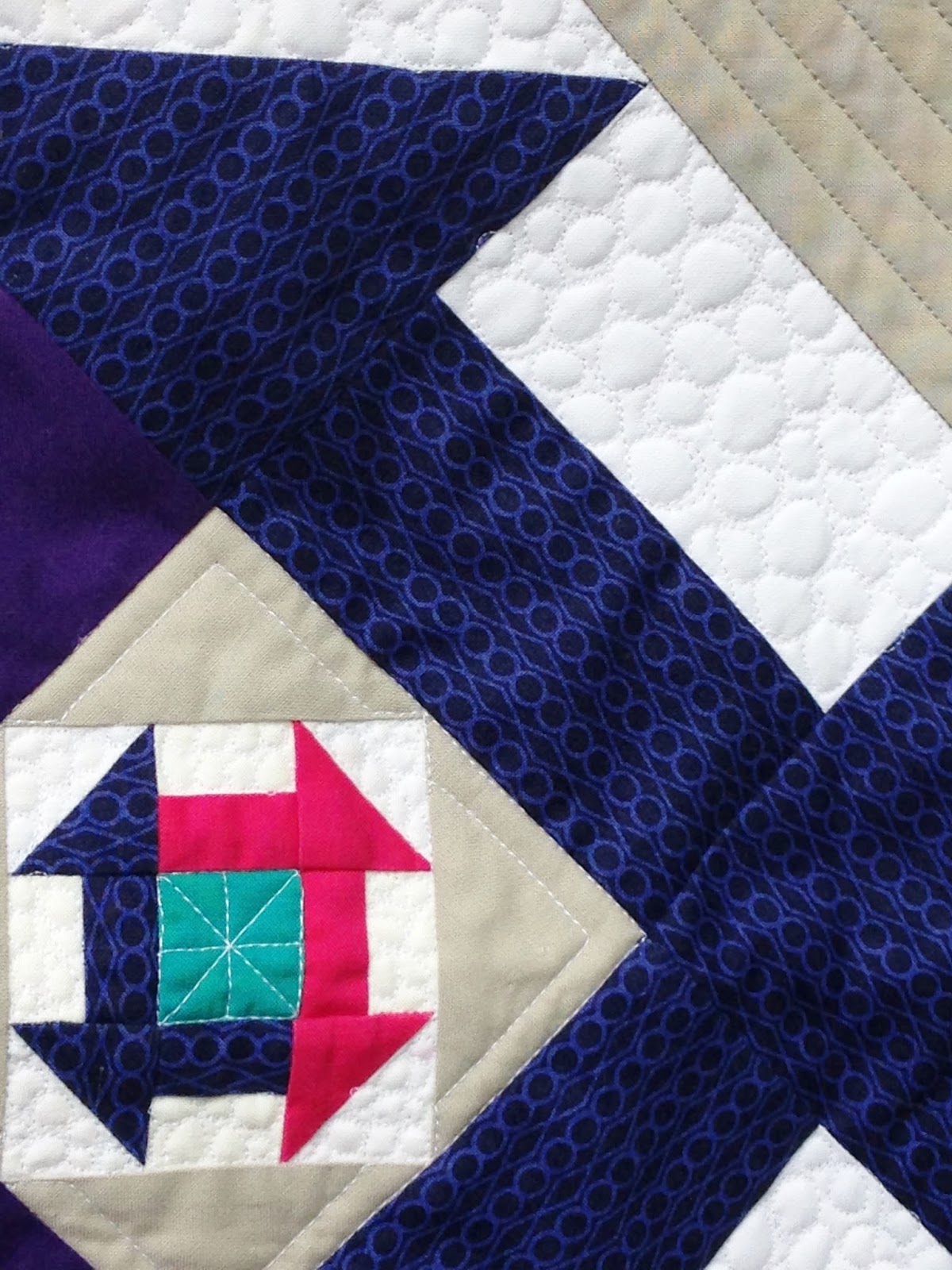 Initially I was going to hand quilt it, but then life happened and I started to feel it was the wrong decision for this particular mini. It needed more dense quilting to fill the negative spaces in a modern manner. 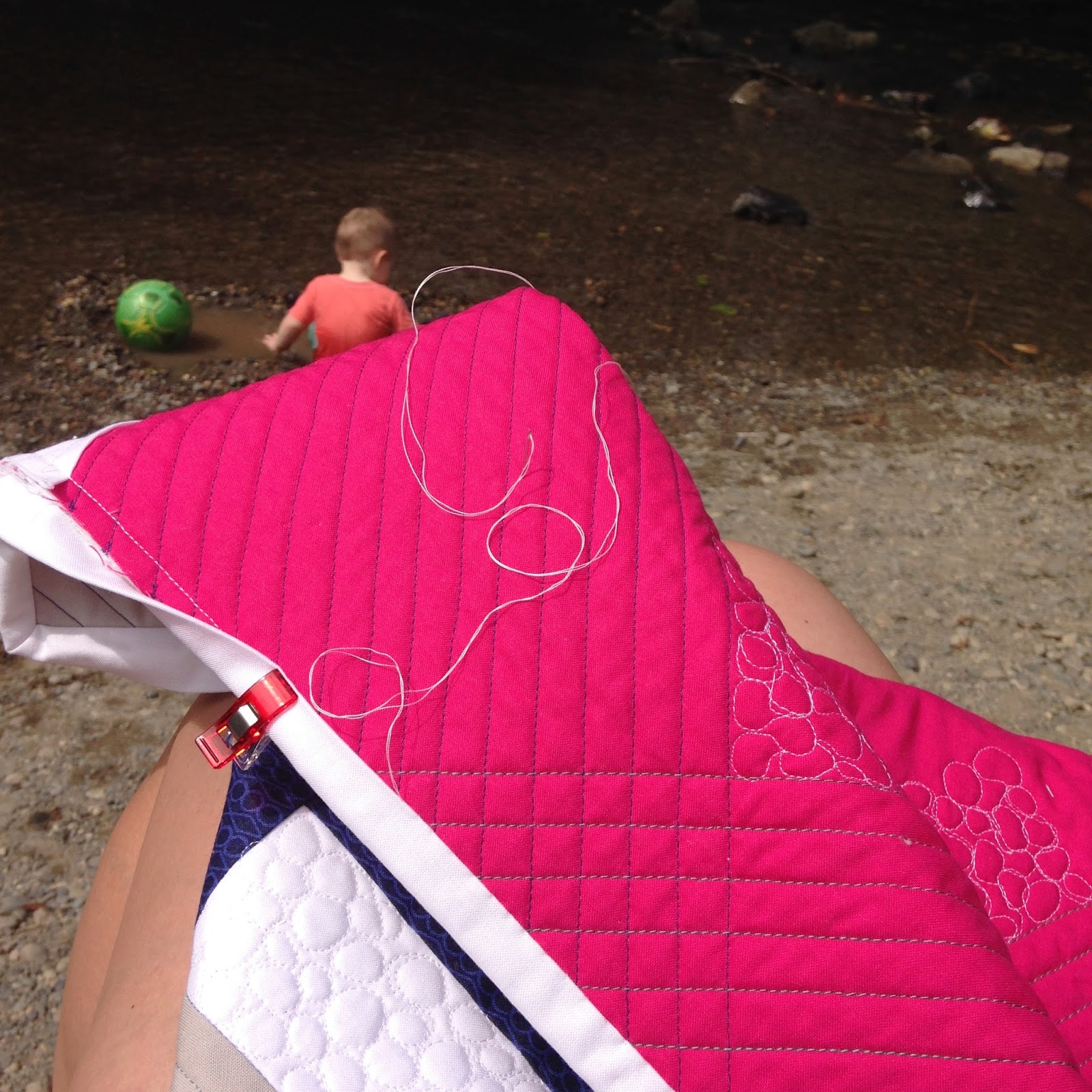 Fast forward to the day or two before we are to trade minis. And yes, there I am, ripping out my hand quilting, re-quilting it in a grid with some fun free motion pebbling.
I quilted it in a crossing grid, using a different color thread for each quadrant. I used white to pebble quilt the white spaces and left the actual churn dash un-quilted to allow it to pop and be the focus.

And of course, there I was, mere hours before handing it over, sitting by a creek, furiously binding, while simultaneously making sure my baby didn’t drown. Skills, I tell you. (Because despite my crafty life, my children still expect to leave the house for fun excursions periodically. The nerve.)

So, I apologize for the lack of properly staged photos, but there you go. For some mysterious reason, fushia is practically impossible to photograph accurately. (My best friend and cousin was my model, and as she will probably kill me for posting this on my blog, I should say good bye now.) 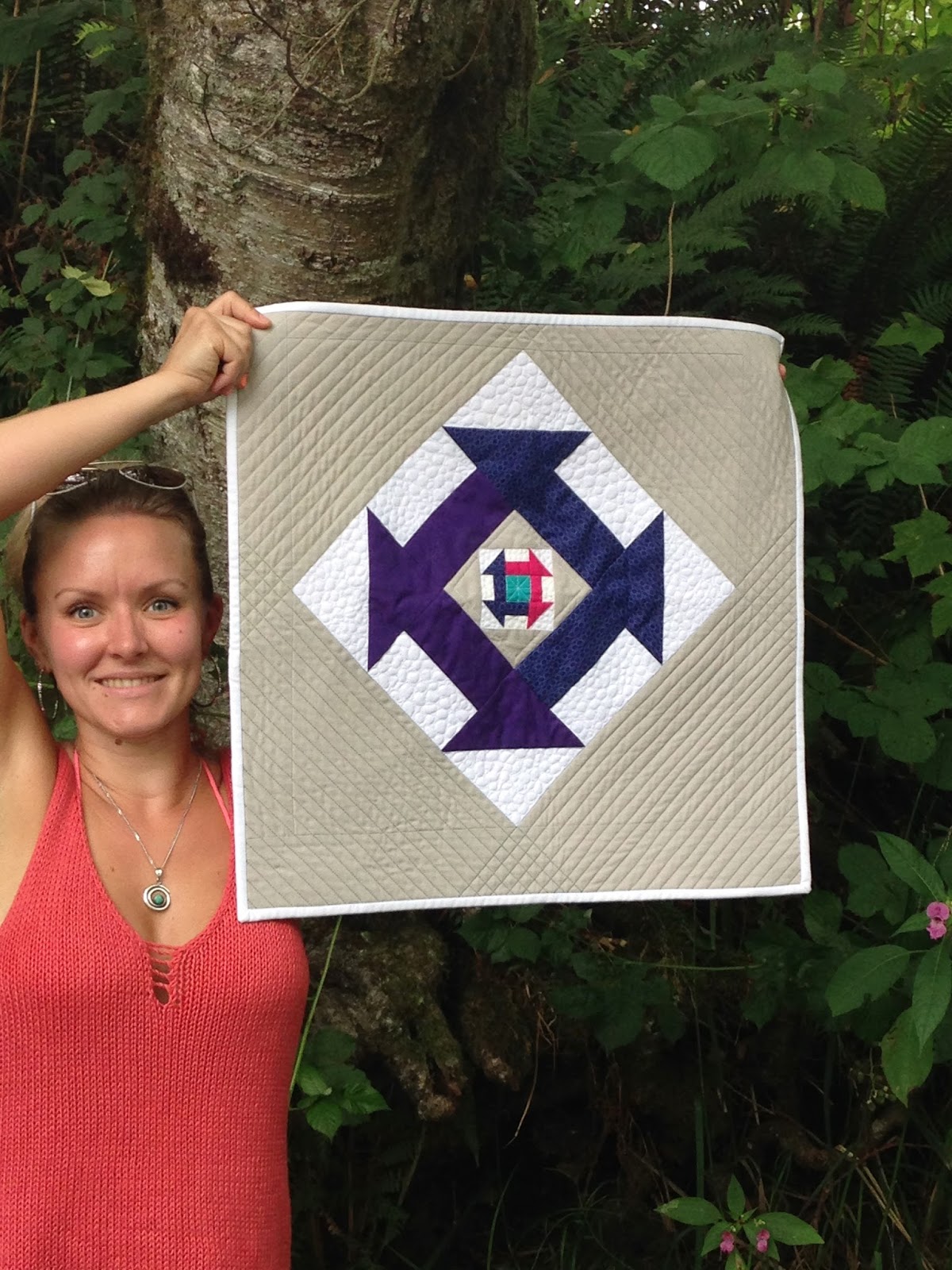 There is something incredibly nerve racking about giving something to someone so talented (you should see the mini she made for another guild member!!!). But, she said she liked it. I’ll believe her.

Linking up with Amanda Jean for finish it up Friday.